Learn the Books of the Bible

Help your students remember the names and order of all 66 books of the Bible with these fun activities. The games and songs are not only enjoyable but, more importantly, will help your students become familiar with the organization of the Bible and ultimately make it easier for them to locate verses. For a printable PDF of these activities, click here.

Cards printed with the names of the books can be used in multiple games and activities. Click on the link below for a PDF file of cards which can be printed on cardstock and then cut apart.

Books of the Bible Cards

A demonstration board with the names of all the books is helpful as well. 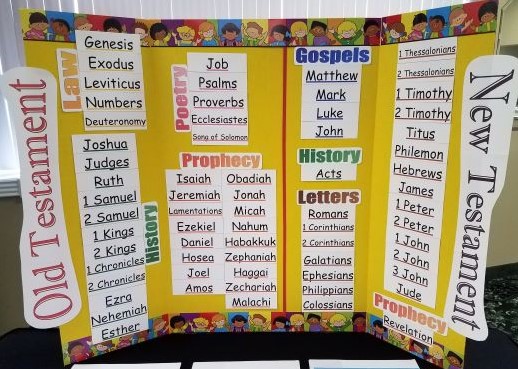 Click on the links below for PDF files of the divisions and names of the books of the Bible, as well as Old and New Testament banners. These are color coded and can be printed and arranged on a board as pictured above.

Books of the Bible and Divisions

Form teams and have them race using the Old or New Testament book cards to see which team can put them in order more quickly.  Variation: Remove a card from each deck and see which team figures out first.

Deal out the Old or New Testament book cards to all the students. Time the class to see how long it takes them to put the cards in order (on the floor at the front of the room). Repeat and have them try to beat the previous time. (Record their best time so that they can try to beat it next week.)

Lay out books of the Old and/or New Testament in order. Then switch two or more pairs. Have students figure out which pairs are switched. Repeat, returning the cards to order and having a student switch a couple of pairs.

Have someone put all the cards (Old Testament, New Testament, or both) in order but leave a couple of them out. Then have other students see how quickly they can identify the missing cards.

Old or New
(Combine decks of Old and New Testament book cards for these games.)

Have a student draw a random card from the deck and call out the name of the book. Then choose a student to say whether the book is in the Old or New Testament. If correct, he/she gets to draw the next card.

Display the Books of the Bible Demonstration Board at the front of the classroom. Have students stand in a line (or if you have a larger class, just have them stand at their seats) facing the board. Make sure cards are mixed up, and then have a student begin turning cards and calling out their names. If the book called is from the Old Testament, students take a step toward their left; if it is from the New Testament, they take a step toward their right (since, as they are facing the books of the Bible Demonstration Board, the Old Testament is on their left and the New on their right). Let the student-caller draw and call several cards; then choose a new caller. Continue in this manner as you have time or until you have gone through all the Bible book cards.

Sing the Books of the Bible

NOTE: You can have a student point to the names of the books of the Bible on the demonstration board as the group sings. My students love leading and using the pointer. We have a telescoping pointer that retracts to the size of a pen when not in use, and we've also used a plastic sword (God's Word is a sword!). Giving several different students an opportunity to lead and use the pointer maintains interest while you repeat the songs multiple times.

Books of the Old Testament Set to "Yankee Doodle" lyrics

Books of the Old Testament set to "Yankee Doodle" audio

Here is a video of one of our 5-year-old students singing the books of the Old Testament:

Call out 3-5 books (e.g., “Genesis, Exodus, Leviticus”) at a time and have students repeat them. Repeat the call-out/response several times. Then call out the next 3-5 books and have them repeat those.

VARIATION: Have a student lead the call-out.

Choose consecutive books of the Bible cards equal to the number of students playing the game. Have the kids sit in a circle and tell them which books will be in play. Mix up the cards and distribute one per student. Play music. As music plays, have students pass cards to the right. Encourage each to retain only one card at a time. When the music stops, make sure each person only has one card. Whoever has the first card in the series of books is out (he or she can play the music for the next round). The card is removed and play continues (place cards in order on the table as they are removed). Whoever ends up with the last card in the series on the last round is the winner.

Divide the books of the Old or New Testament or complete Bible into two equal stacks. Have two players face off, taking three cards off the pile, saying, “I (first card), declare (second card), truth (third card)!” The third card is turned face up, and whoever has the card closest to the end of the Testament or Bible wins that round. Have another student challenge the one who won the first round. Continue in this fashion until all the cards are gone. You can allow the students, as they are eventually out, to keep any cards they won, and then add them up at the end to see who has the most.

Pass the Beanbag (or Ball)

Have students stand or sit in a circle. Pass a beanbag (it can’t roll away like a ball). As each person receives the beanbag, he/she names the next book of the Bible (start wherever you’d like).

Have the entire group call out the next book as each person receives the beanbag.

VARIATION: From time to time call out “Freeze.” The person holding the beanbag must name the next three books in order.

Randomly choose a card from either the Old or New Testament deck. Don't let the students see the card. Have them try to guess the name of the book on the card by randomly naming a book. If the card you're holding comes before the book guessed, say, "Before." If it comes after the book guessed, say, "After." Keep narrowing it down until someone guesses the correct book. Whoever guesses the book, gets to choose the next one.

Choose several pairs of identical book cards from two Old or New Testament decks. Mix the cards and lay them out in a grid on the floor or a table. Have students take turns turning over two cards at a time, trying to find matches. If a match is found, the student gets to hold the cards. (Although in normal “memory game” rules the player gets another turn after finding a match, we usually have play pass to the next player.) The player with the most pairs at the end wins.

VARIATION: Break into several smaller groups instead of playing with the whole group.

Have a student randomly pick a card from the deck of books of the Bible cards, writing on a markerboard the number of blanks corresponding to the number of letters in the book name. The student then calls on her classmates to guess letters of the alphabet. If a guessed letter is in the book name, the student fills in the appropriate blank. If it is not, the student begins to draw a stick figure, starting with the head. The class tries to guess the name of the book of the Bible before the complete stick figure is drawn (decide ahead of time how much detail will be drawn—ears? fingers? toes? etc.). The student who guesses the book name correctly gets to direct the next game. If a student guesses a word instead of a letter and the word is incorrect, decide how many parts of the stick figure will be drawn as penalty.

NOTE: You may wish to have the books of the Bible demonstration board available for reference during this game, or not. 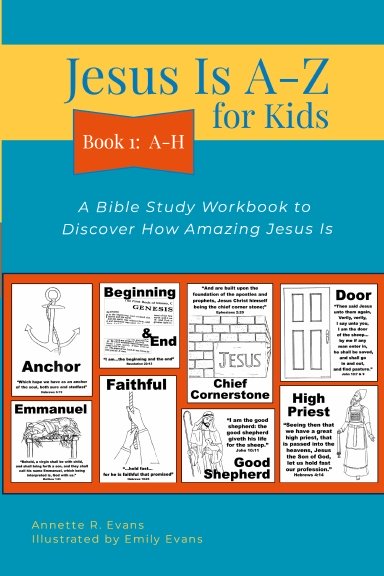 I'm excited to share a new book I wrote for kids! This book is based on the Jesus Is A-Z Sunday school curriculum and covers letters A-H. Kids can write in the book as they read and learn how amazing Jesus is. This book is the first in a series and is available here. 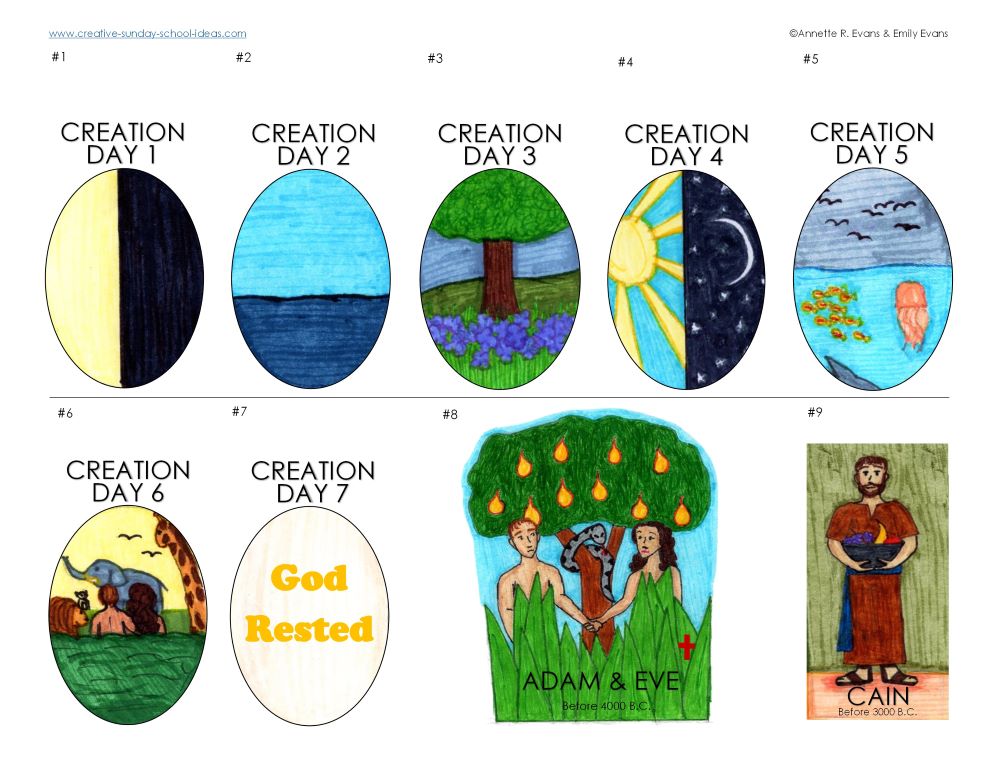 These colorful Bible Timeline Figures were designed by me and drawn by my daughter Emily. They are available for instant digital download in our Etsy shop: Blossom Cottage Arts.

These characters are great for helping students see the big picture of the Bible. You can create a large timeline on the wall or a portable timeline in a binder. You can also attach craft sticks to figures and create small puppets for acting out Bible stories. More information here.

PERMISSIONS POLICY: The content on Creative-Sunday-School-Ideas.com is copyrighted. Feel free to print and make copies for your own personal, teaching, or church use only. You may not use this content for commercial purposes. You may link to this site but you may not re-post anything from it anywhere else on the internet without our express written consent.

We hereby confirm, as stated on our Privacy Policy page, that we do not sell personal information.